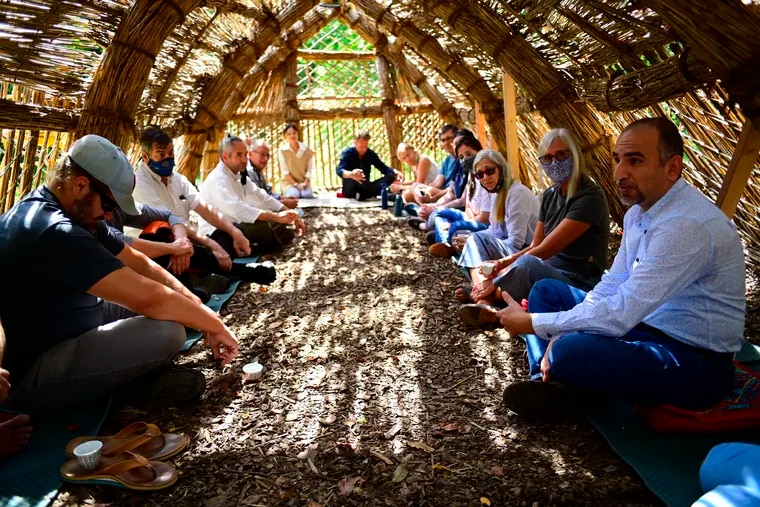 Ali Dabbagh finally found himself able to cry the day he saw children casually pass the body of a sniper victim outside their school in Baghdad in 2004.

“I never shed tears for all the tragedies,” said the resident of Ardmore, 71, who immigrated to the United States in 2014. “I thought I had no feelings because I didn’t hadn’t shed tears, but I’m becoming a human being again.

Dabbagh, an architect and father of three, said he felt “a barrier fall” during an event Saturday at the Schuylkill Center for Environmental Education in Roxborough. “Reconciliation – A Healing Encounter” took place on the 20th anniversary of September 11 and brought American emigrants and veterans of the Iraq War face to face in a traditional Iraqi structure called a mudhif.

“Seeing people who weren’t on duty have the courage to sit down and listen inspired me,” said Matthew Abbudusky, 36, of Havertown, who served in the US military in Iraq in 2006 and 2007.

“They listened with open hearts,” said Abbudusky, a pastor with The United Church of Christ.

With 340 lush green acres of woods and trails, the Schuylkill Center provided a beautiful setting for the event. And while the roof of the mudhif was bent by the winds of Hurricane Ida, people sat on cushions on either side of the dirt floor inside in a friendly but dignified atmosphere.

The stories, especially those heard on a 25-minute sound collage created by psychologist and artist Jack Saul, who facilitated the coming together, did not make the listening easy. One US serviceman described “body parts falling on my humvee” after seeing a child soldier throwing a grenade. “It was me or him,” the man said. “I pulled out my gun.”

Saul is the director of a “public art and conversation project” called Moral Injuries of War, which focuses on the psychological injuries veterans, civilians, and journalists can sustain in times of war.

“Moral injuries are a matter of conscience,” he said. “It is the shame and guilt associated with having perpetrated, seen or failed to prevent morally wrongdoing. It is a wound to the soul.

One of the service members who sat quietly in the mudhif was Leroy Enck, 38, of South Philly; he participates in a group therapy program at the VA Medical Center in Philadelphia for veterans with mental health injuries.

During an interview, Enck, who grew up in Lancaster County, said he joined the Marines right out of high school and ended up serving on three deployments to Iraq. He described witnessing a bullet to the head of a baby; he also saw a voracious dog eat the corpse of a soldier.

Enck, a soft-spoken father of a 6-year-old girl, said he viewed the reconciliation event as “a transformative opportunity” for American civilians who could “come away with a new perspective” on those who have served.

Iraqi artist and refugee Yaroub al-Obaidi, who lives in South Philly, was among those gathered in the mudhif, which he designed in collaboration with Seattle artist Sarah Kavage, who was also in attendance. Part of the Lenapehoking Watershed Environmental Art Project, or Delaware River Watershed, the structure, made of thatched reeds, was damaged but still standing after the remains of Hurricane Ida.

The idea for the September 11 event was born as the mudhif was built last June from conversations between volunteers, including refugees from Afghanistan and Iraq and military veterans of conflicts in those countries, who worked side-by-side, said Tina Plokarz, director of the environmental art from the Schuylkill Center.

“During the two week build time, it was very intense and beautiful to see how people came over and over and connected with each other,” she said. “We wanted to continue the healing process that had started. And what better time to do so than the anniversary of September 11? “

Obaidi, 43, who came to Philadelphia from Baghad in 2016, said a mudhif can have many functions, including a place where people have “difficult conversations”.

Elizabeth Ellman, deputy director of the center, served in the United States Army in Kuwait.

“It’s not just military veterans or refugees who need healing,” she said. “Everyone was devastated by the events that happened. We must eliminate all kinds of differences, open our arms and help each other. We’re all in the same boat. “

Saul, who lived in Lower Manhattan with his two young children during 9/11, said Saturday’s event also suggested that in addition to mourning the victims of terrorism and understanding the challenges veterans face Americans must also consider the cost of war as a default strategy.

“I think about the importance of gatherings like this, where the silence is broken,” said Kelly Denton-Borhaug, professor of global studies in religion, peace and justice at Moravian University in Bethlehem, in Pennsylvania, during the session inside the mudhif was coming to an end.

“I was struck by the voice of the veteran who explained that he wanted to say something about turning his gun on a child,” Denton-Borhaug said. “I think about how difficult it must be to experience something like this, and not be allowed to talk about it. I think about the importance of gatherings like this where the silence is broken.