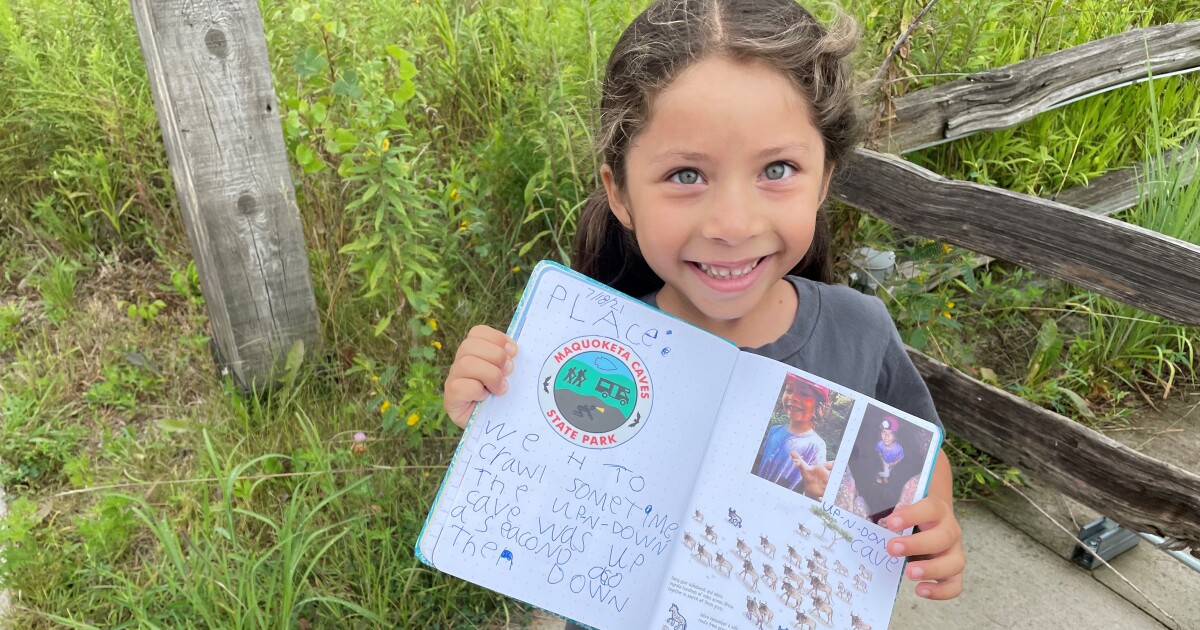 Six-year-old Paloma Bribriesco leads the way around the Indian Creek Nature Center in Cedar Rapids. She has just finished the nature camp. And sometimes she would run too fast to keep up.

Paloma’s pink and white tennis shoes pound the wet dirt off the court as she runs towards the center.

“I have a pretty good bird sound!” She said, and tweeted on her way.

When she was on a break after camp, Paloma watched the turtles in the indoor exhibit. She pointed to Squiggles, which she was able to stroke that day. She explained why nature is so important to her.

“Because it kind of gives us more things to know for later in life, like if you go on a jungle cruise and get lost or get attacked by a bobcat,” he said. she declared.

If people are attacked by a bobcat, Paloma recommends against running, as a bobcat will always be faster than humans. She said people should try punching him anywhere in the nose or in the eyes.

Paloma earned his Junior Ranger badge through the Channel Islands National Park and National Park Service. She said part of her job as a junior ranger is to share her knowledge with adults. She can do it in Spanish and English. She listed a few animals, “Tortuga … pulpo …” (turtle and octopus).

“Then you can teach others to respect all of nature. And teach them to love nature, and then there would be more people on the same path,” she said.

A group of Latino civil rights activists joined Paloma on this path. The Iowa League of United Latin American Citizens (LULAC) has created a climate and environmental justice committee. Paloma was the youngest member of the reunion.

Cristina Muñoz de la Torre led the conversation. She is the new director of climate and environmental justice. Part of his responsibility is to ensure that Latinos in the state have healthy living and working conditions. In her work, she informs federal and state decision makers so that all communities can see environmental justice.

“For the larger world and for the rest of the United States, it may be that [be] Obviously there is a large Latino presence in Iowa, not to mention that the type of environmental and climate justice issues we face are unique in Iowa. So we have to bring this attention to state and national levels, ”said Muñoz de la Torre.

She also said that compared to other states, Iowa doesn’t get the same national attention. She cited the August derecho as an example, saying the storm did not cause the same national concern as other natural disasters.

LULAC Iowa State Director Nick Salazar gathered comments from Latinos across the state last year to ask them what was important to them. He has said over and over again that the answers are about the environment. Although the environment has always been a concern within LULAC, Salazar said it had not been identified as a priority in recent years.

He said the injustices Latinos face, voting rights, workers’ rights, are all interconnected.

“We believe that the climate and environmental issue is the mother of all collective problems, which is kind of an umbrella for what we are already doing,” said Salazar.

A recent United Nations report found that climate change is accelerating and is mainly caused by humans.

Muñoz de la Torre said Latinos are generally more affected by the dangers caused by climate change because they are on the front lines. Many in Iowa work in agriculture, manufacturing, and construction. These types of jobs can feel the effects of climate change more acutely.

Communities of color, in general, are considered a vulnerable population to climate effects that can lead to health threats. Climate change has been shown to negatively impact health and the economy and increase information and service gaps for Latinos, according to the Environmental Defense Fund.

“I think one of the most important things is to recognize that environmental injustice, economic or racial inequalities are all symptoms,” said Muñoz de la Torre. “These are all different symptoms of the same type of disease, which is the systemic marginalization of certain communities and their sacrifice for economic gain.

The Iowa Environmental Council has launched a justice, equity, diversity and inclusion initiative as a way to address the inequalities that preoccupy Muñoz de la Torre and other Latino leaders.

“I think we need more perspectives, more voices, we need people coming from, you know, new angles,” said executive director Brian Campbell. “We need Latino leaders as well as all the other diverse voices in order to have the best environmental solutions and solutions.

The new partnership between the Iowa Environmental Council and LULAC is making this happen, according to Salazar and Muñoz de la Torre. During the meeting, Muñoz de la Torre explained how in the past environmental justice movements were mainly led by white organizations.

The various leaders are also focusing on engaging members of the younger generation to get involved in environmental policy.

“It inspires me to have younger generations who already have this language and this education and the tools to speak. And so I really want to support these efforts,” said Muñoz de la Torre.

Back at the nature camp, Paloma Bribriesco wants to become an environmentalist when she grows up. In this way, she can teach others how to protect nature for humans and animals. She ended the visit to her nature camp with a large solar farm where she can change the direction of one of the panels. She left everyone with a big idea before she left for lunch.

She focused her blue-green eyes and looked straight ahead with a little furrow in her forehead, “Less there is nature, then there is less nature to support us, so that we can thrive.”